Have you ever imagined waking up to a world without Televisions, no radio stations relaying news and information and no newspapers on the stands, it can not only be devastating but frustrating, right?

And how many of us could afford to stay for even just a day without their smartphones logged on WhatsApp, Facebook or Instagram? Yes, I know how that feels especially in this age and era where everyone likes to consume real time news and current affairs feeds.

Well, this is a clear manifestation that human beings literally cannot live in a world devoid of information. But unfortunately citizens in Uganda still face hurdles in their quest to access information from government and public bodies despite constitutional provisions in the country's law books to enhance their rights.

The Access to Information Act 2005, it’s regulation of 2011 and Article 41 (1) of the Uganda Constitution empowers the citizens to Access information from government and public bodies.

However in real practice, a larger proportion of the citizenry especially in the rural countryside are oblivious of information with government and public bodies, partially because they are not aware of their rights of access to information. And most often, public officers ride on this to sweep under the carpet information which is vital to aid the citizens in critical decision making, such as matters of livelihood, budget making processes and to hold such public officials accountable for their actions and omissions.

In this country, the citizens trust and rely on the media to interrogate, investigate and report on critical information with government and public bodies, for instance a survey report from Uganda National Bureau of Statistics- ubos.org as of 2014 and further updated shows that nearly 90% of the populace access news and information through radio stations.

Yet media practitioners are equally vulnerable, many journalists who do investigative stories have been brutalized and others arrested on fabricated charges when they demand for information which are often not deemed classified by the Ugandan Access to Information Act 2005 and Article 41 (1). 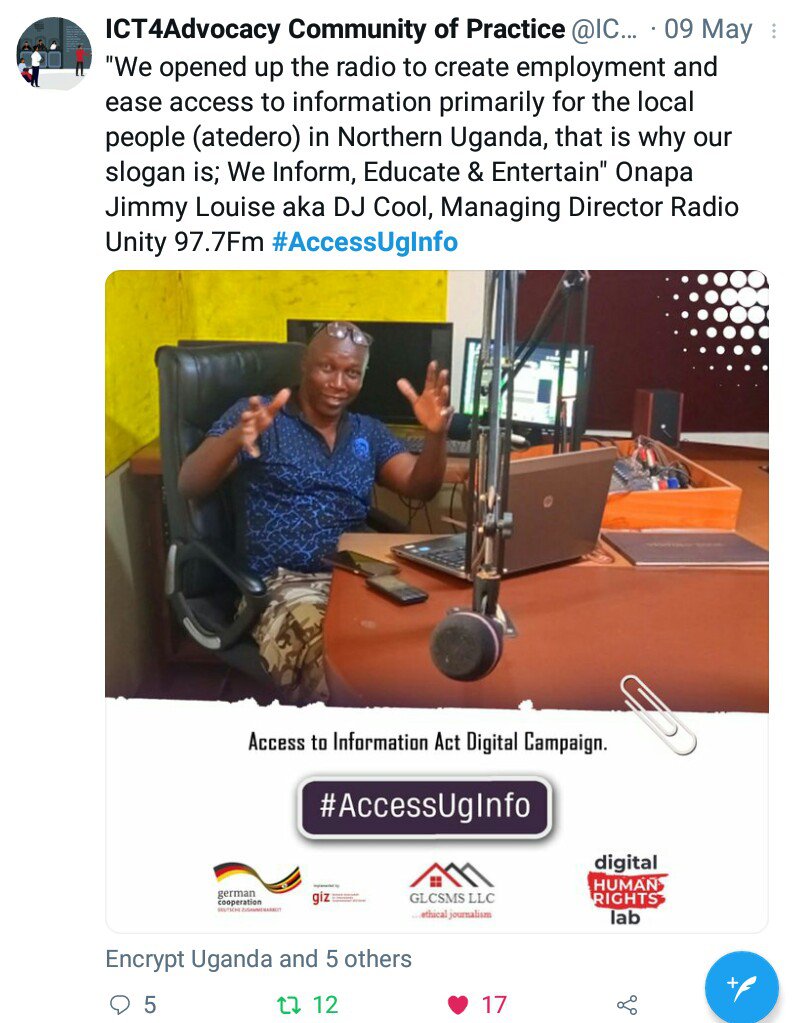 It is upon this background that the Great Lakes Center for Strategic Media Studies-GLCSMS LLC seeks to salvage the situation deliberately and plan a two weeks digital campaign on Access to information with the title #AccessUGInfo in partnership with GIZ, Digital Human Rights Lab and ICT For Advocacy COP.

The two weeks campaign run between 26th April – 10th may 2021 on the social media platforms – largely twitter and Facebook accounts of the ICT for Advocacy CoP, Media houses including Radio Qfm 94.3fm, Unity fm 97.7 and the promotional efforts of social media influencers.

It is on record that Lira city council authorities, like most local governments, has been in the spotlight for gross mismanagement of public resources, especially public land that are usually fraudulently given away to private developers. As a matter of fact there is a contentious issue of plot 41 (public land) church road, where a pharmacy has been erected. In an attempt to demand for accountability, at least two media entities including Great Lakes Center For Strategic Media Studies (GLCSMS LLC) officially used theAccess to information Act tool to demand for information regarding the transaction.

We would later realize that it is worth empowering the citizenry through a digital campaign on their rights to access to information. Among our success stories of this campaign are at least four civil servants attached to the district lands commission, who are out of office on interdiction to date. 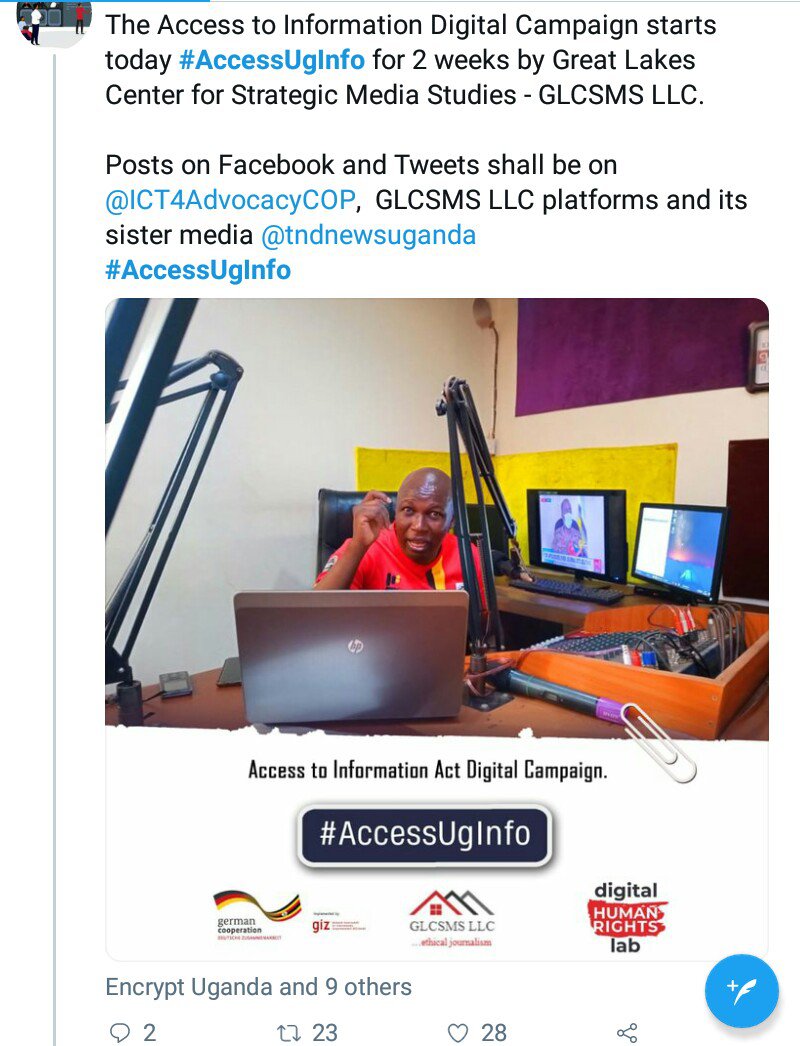 Now, forget about the physical impediment of Access to information, a new vision Story of 30th March 2020, Projects that 42% of Ugandans, which approximately is a population of 10m people actually own smartphones and have access to internet connection. This is a new phenomenon where literally everyone has turned into a citizen journalist, sharing information, pictures and videos on Facebook, Twitter, WhatsApp and other platforms.

However, this is not seen as efficient and effective in a country which has the highest internet cost in the East African Region.

It should also be noted that 40% of Ugandans have no connection to the national power grid, this makes it possible to access internet connectivity especially in rural areas. And this predicament was even made more complex during the recent elections where the government deliberately instituted an internet shutdown for nearly a fortnight. 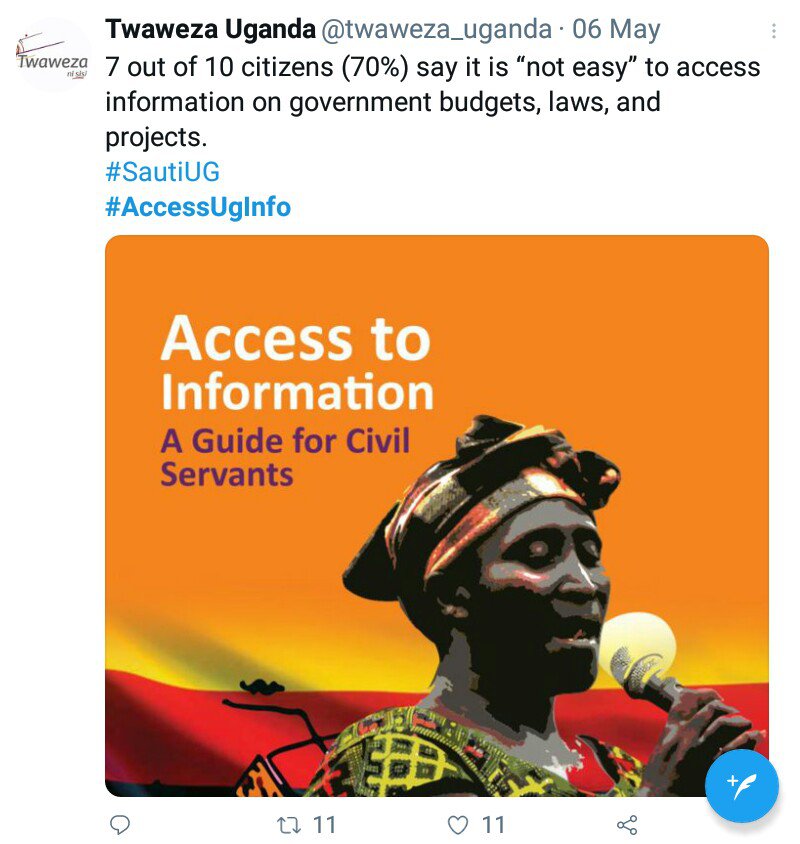 Media Practitioners Excited With The Campaign

“I am so grateful to GLCSMS for running this campaign, especially for sharing the request forms this will empower us to access information with government bodies, Ambrose Okwanga, a journalist with Voice of Gospel radio 91, 7 FM remarked” 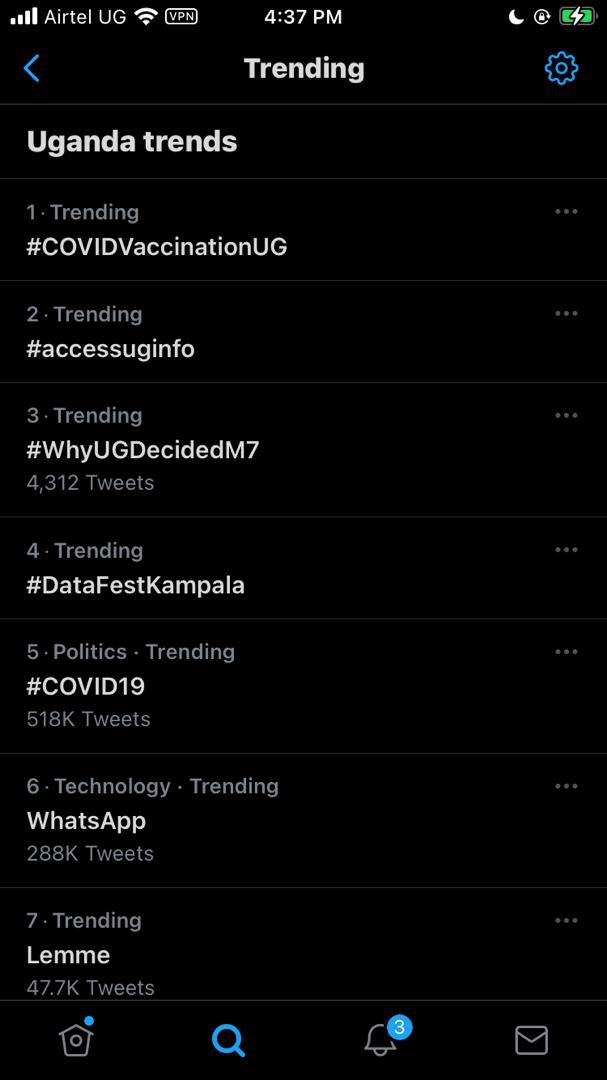 By #AccessUGInfo trending at number two in the whole country points to the success of the campaign and further evident enough that journalists and the citizens are enthusiastic on this topic and a barrier that independent media agencies and activists should join GLCSMS to continue pushing especially in the wake of citizen journalism.

To offer an improved access to justice in Uganda, the use of ICT has been adopted by the government. At the same time, the civil society innovated various tools such as websites and web-based applications that aimed at enhancing justice.