To be mentally ill and not know there is help is maybe the worst thing to experience. Mental health isn't something we can afford to ignore anymore.

For months I couldn't get out of bed, I hated life, felt hopeless and even wished I was dead so that I wasn't here anymore and I didn't know what to do. I was depressed but I didn't seek help because truth be told I didn't know help was out there or how to even start. Like most of us, I too thought mental illness is that mad man in my village ploughing through garbage. But I was wrong.

According to WHO, mental health is a state of well-being in which the individual realizes his or her own abilities, can cope with the normal stresses of life, can work productively and is able to make a contribution to his or her community. Mental illness then becomes the opposite of that and to that effect, according to the Diagnostic and Statistical Manual of Mental Disorders , over 100 mental disorders exist. The problem though is that in Uganda, a country of 44+ million people, there are only about 50 psychiatrists who can diagnose and treat. To say this is dire would be understating it.

Nonetheless, mental health help is offered in the country. Whilst speaking to Dr. Agaba Denis, a resident at the Department of Psychiatry for Makerere University in Mulago, I got to learn that there is a free mental-health clinic in Mulago Hospital. It is called the SB Bosa Mental Health Unit, something I didn’t have knowledge of. He tells me that on average the clinic will receive about 30 patients needing help. While these numbers are high enough, they are also representative of the fact that people are seeking help. This can be attributed to the growing mental-health advocacy and the growing capacity to diagnose in terms of the human resource.

The mental health landscape in Uganda- working with culture and religion

People still have the perception that if you don’t have physical pain then you are not ill. Depression is just termed as lazy and mental illness is explained as a curse. In Uganda, culture and religion also play a big part in an individual’s social health. As such a lot of people have often sought mental health help from their religious and cultural leaders. In fact, Dr. Agaba tells me that according to a study done by Dr. Catherine Abbo and others, before people go to Butabika 60% have sought help from cultural avenues and 85% have sought help from religious avenues. 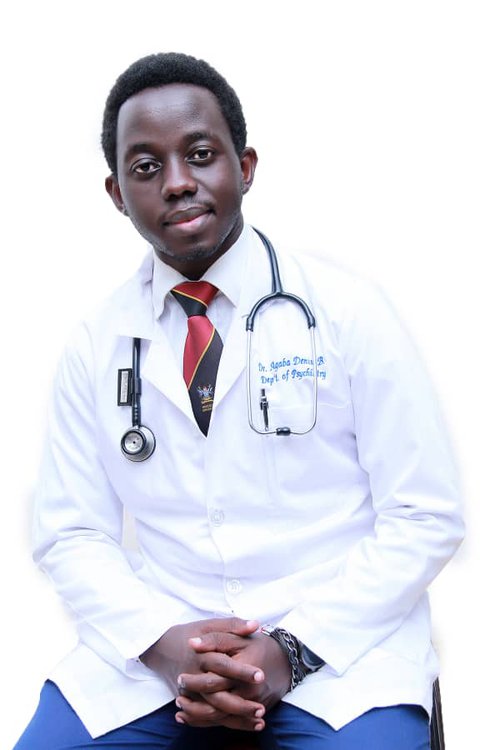 To that extent, Dr. Agaba advises that it's best to acknowledge a patient’s efforts in seeking help from these avenues. It has to be a step-by-step endeavor to a point where the individuals themselves favor medical help to alternative forms of help. “You can’t tear the culture away from an individual because that would mean removing an important fragment of the social aspect of the individual, leaving them misplaced” said Dr. Agaba. The idea is, the death of culture is a risk factor for mental illness since there are aspects of our culture that were protective against mental illness.

The truth is, as Dr. Agaba admits, in dealing with a patient you ought to promote the healthy aspects of culture. For example, societies had been accustomed to fire-place discussions, family merry-making and the like, all of which has often played a part in keeping people at a good level of mental health. The trouble though is as culture breaks away and people become more individualistic, we end up breaking down because the social support structure that culture enables is lost. As such Illnesses like depression which is the number one mental illness in Uganda, are on the rise. So, people need help - medical help. However, according to the WHO promind study of 2012 on Uganda, the unmet need of psychiatrists in Uganda has been put at 93%.

The role of digital spaces in service delivery

Digital spaces can be exploited to better service delivery. In a country with few psychiatrists but with the provision of the internet, services could be rendered more efficiently when some part of the practice is digital. At the Mulago hospital mental-health clinic for example, after assessment and diagnosis, someone may be admitted or put on a management program where treatment involves medication, psychotherapy and social therapy. However, outpatient individual’s must have regular visits with the psychiatrist which presents a financial burden on the individual. Someone may therefore opt not to continue with treatment, or experience aggravated stress levels that they spiral into self-hatred. According to Dr. Agaba, if some of these sessions could be conducted using digital tools such as zoom and phone calls, that would mean he can execute his job without having to move, especially now in the time of a pandemic.

Digital tools present a needed dynamic to the practice of medicine especially mental health. Someone who might be in the heat of the moment may need immediate help through therapy. Think of it this way, when you are having a panic attack, you can go through a session immediately as opposed to waiting for a physical session and yet that moment could have been a major breakthrough in your treatment. Digital spaces make accessibility easier to the person who may need help and faster. Ideally though, it’s not a one size fits all, it has to be curtailed to a particular situation because some situations can be handled digitally and others need a face to face interaction.

In any event though since the number of psychiatrists to patients is overwhelming, digital spaces would help shrink the apparentness of that number. If in a day a doctor has 10 sessions back to back, with digital sessions they can have more and still enjoy time with their families. Nonetheless, help exists. So seek it!