Women, gender-diverse persons, and marginalised sections of society across Africa and beyond have been using the internet to overcome the obstacles posed by an imbalance of power and social restrictions. Internet shutdowns, a tool increasingly used by governments across the world, are depriving these populations of access to the ways in which the internet acts as a leveler.

Women of Uganda Network (WOUGNET), organized a Breakout Session on May 6th 2021 during the Online Global Digital Development Forum (GDDF) 2021 to share perspectives of free and fair elections, cybersecurity, freedom of speech, and expression and digital rights, and discuss coping strategies these populations use when they are digitally disconnected. This session was facilitated by Rohini Lakshané, Public Policy Consultant, The Bachchao Project.

Global Overview of Internet Shutdowns including Impact on Marginalised Communities

The session commenced by Felicia Anthonio, the Campaigner, #KeepItOn Lead at Access Now giving a global overview of internet shutdowns and their impact on marginalized communities including women and girls and also highlighted some of the testimonies received under Access Now’s Shutdown story project over the past year or two. It is evident that some governments think it is convenient to shut down the internet when barriers such as low numbers of women in ICT, high cost of data, stereotypes about girls in tech and online harassment against women are keeping them offline. Shutdowns happen during important national events: elections; protests; military coup; communal conflict; broadly for precautionary measures; and during school exams.

Telling the human impact of shutdowns is crucial. For instance, Access Now has a dedicated initiative to make the voices of those impacted by these shutdowns heard over the years and they continue to receive stories from countries such as; Uganda, Cox Bazar refugee camp in Bangladesh, Pakistan, and India. For example, in 2020 there were at least 155 incidents in 29 countries. This shows that some governments still consider the internet as a luxury yet it is a basic need. Shutdowns require strategies such as the need for movement building and solidarity, strategic litigation, policy-maker engagements, and finding allies to always #KeepItOn.

Read more: Cutting internet access when people need it the most: stories from Uganda, & Internet shutdowns report: Shattered dreams and lost opportunities — a year in the fight to #KeepItOn 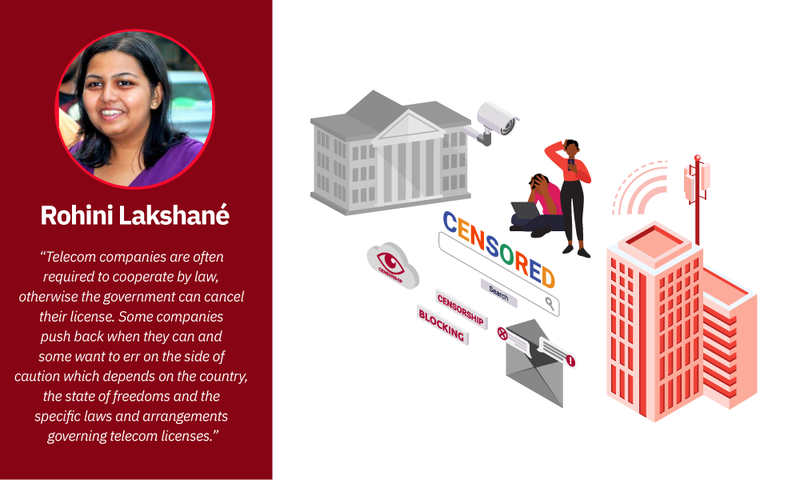 The impact on Women’s Online Expression and Participation

Sandra Aceng, the Program Manager at WOUGNET, elaborated her Global Network Initiative (GNI)-Internews fellowship research "The Impact of Internet Shutdowns on Women’s Online Expression and Participation in Uganda". Specifically, the nature and forms of internet shutdowns experienced by the women, how women's online rights are violated/affected by internet shutdowns, and the coping strategies adopted by women to circumvent internet shutdowns in Uganda. The research findings showed that the internet is used daily for information sharing, socializing, online biz, etc. However, internet shutdowns affect the enjoyment of fundamental freedoms of expression, association and political participation of both men and women directly. For women, the effects of shutdowns may have far reaching negative effects on how they use the internet compared to men.

Internet shutdowns were reported to affect a spectrum of women’s rights and freedoms including economical, social and political rights and this is worse in rural areas and some pockets of cases in urban areas. Women respond differently during periods of internet disruptions although there was high usage of VPNs during internet blockages.

There is a need to strengthen awareness campaigns on the critical role played by the internet in advancing realization of women’s rights online and rights of the marginalized; and formulate a community of practice like one under the DHRLab to engage and challenge the governments against internet shutdowns. 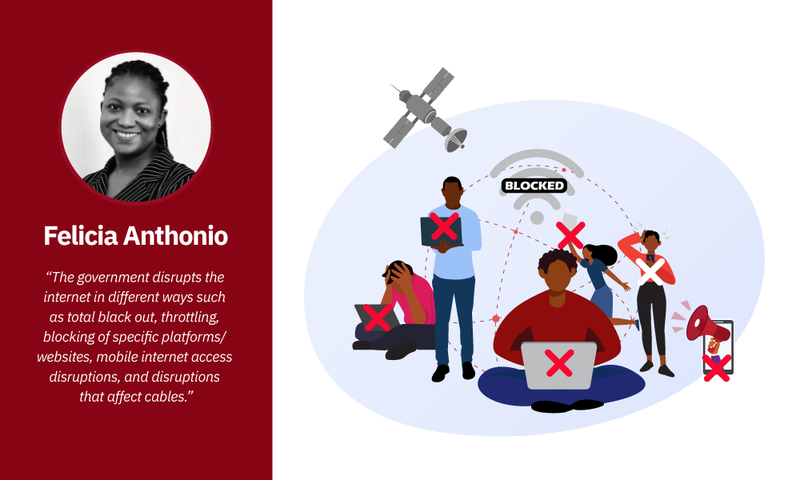 The Gendered Impacts of Internet Shutdowns in Africa Countries

Deborah Brown, the Sr. Researcher and Advocate, Digital Rights at Human Rights Watch, shared some key findings from a report she co-authored, “Why Gender Matters in International Cyber Security”, which covers the case study on the gendered impacts of internet shutdowns in a number of countries, including 3 countries in Africa.

Three experiences of women using ICTs were emphasized based on the report. These included: women still do not enjoy equal access to ICT even when they do have access to ICT. Also, the use of ICT is gendered. Information centered online such as sexual and reproductive health and rights information are seen as taboos. Partially, there is the existence of the gendered dimensions of internet shutdowns. However, shutdowns impact people based on sexual orientations and gender identities.

The impact of Shutdowns on Women and Organisations’ Advocacy work

Zaituni Njovu, the Executive Director at Zaina Foundation, spoke about the impact of the internet shutdown that happened in Tanzania during the 2020 election, including the impact on women, and an overview of her organisation’s advocacy work against shutdowns in the country. She elaborated on the Electronic and Post Communication (Online Contents) Regulation imposed by Tanzania Telecommunication Regulation Authorities (TCRA) in July 2020.

Women are protected by the same fundamental human rights regulations as men, yet women are still denied those rights in societies around the world.

This project is led by WOUGNET in cooperation with the Makerere University School of Women and Gender Studies to enhance women's rights online.

Trauma caused by COVID-19: taking it one day at a time

COVID-19 continues to paralyze the world. Uganda has so far experienced two waves of severe COVID-19 outbreaks, which have affected not jus…