Online GBV - why it's still crucial to raise awareness

Just like offline sexual harassment, online harassment is a structural problem rooted in inequalities. It serves to uphold the patriarchy by silencing women’s voices and yet women human rights defenders often use online spaces to advocate for their cause, making them particularly vulnerable to online sexual harassment.

The Internet is a great space for everyone to interact, learn and share information. However, sometimes it can be devastating particularly for women. In March 2020, when the coronavirus broke out in Uganda, many people were forced to stay home. This made the Internet a utopia to solve many problems. However, digital rights issues such as online gender based violence (GBV) increasingly emerged and have forced many, especially women, to exit the online space due to fear of further threats and harassment that could lead to double burden of depression and trauma.

According to the recent report by Pollicy, one in three women who use the Internet have experienced online GBV in the African countries (including Uganda) surveyed. This research has revealed to women's rights online advocates that online GBV is still a serious problem especially for women in Uganda. For instance, “75% of women interviewed reported suffering from mental stress and anxiety due to their experiences of online violence” and “95% of Ugandan women were not aware of any policies or laws in place to protect women against online gender-based violence in Uganda''. 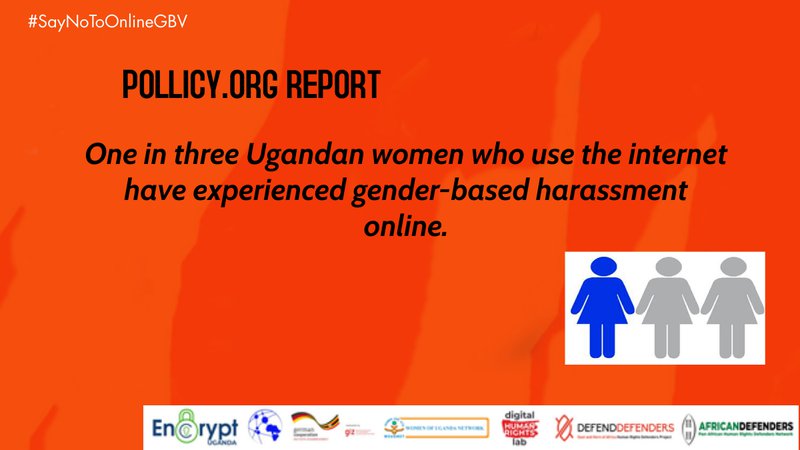 In 2020, during the 16 Days of Activism against GBV campaign with the hashtag #SayNoToOnlineGBV, Women of Uganda Network (WOUGNET) in partnership with Encrypt Uganda, DefendDefenders, Digital Human Rights Lab, African Defenders and Digital Literacy Initiative highlighted issues and cases of online GBV in Uganda. This provided a contextual understanding of online GBV and its various forms. In our campaign we particularly focused on six forms of online GBV, which we each contextualised with the testimony of a victim: Including;

One of the over 16 stories survivors and victims of online GBV shared is;

Anne’s NCII story: I was fired from my well-paying job, when my nude photos were leaked online by my ex-boyfriend. On top of the psychological torture, I experienced economic loss too. On social media, I received a lot of backlash from people claiming I leaked the photos myself in an attempt to look for popularity.

This story shared is just an example of many women who have faced the same incident while using the Internet. Acts such as cyber stalking can happen offline, online, or both through monitoring a victim's online activities and systematically sending unwanted messages which can lead to victims feeling observed, intimidated, and threatened hence, they no longer feel safe neither online nor offline.

During the campaign, five women’s rights activists in the digital age were interviewed to share their reviews on current studies, existing gaps, the rate of awareness creation, and mitigation measures on online GBV in Uganda. In our patriarchal society, we particularly need to hear more women speaking up to tackle threats and harassment online. Since online GBV acts as a significant barrier to women’s access and meaningful use of the Internet. 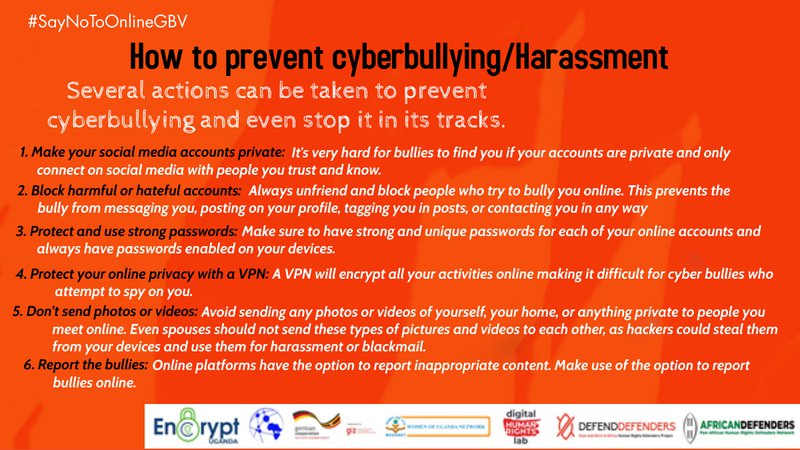 The workshop kicked off by Joan Katambi leading the introductory session and concluded by urging all the participants to become ambassadors of online safety and to stand up against online GBV.

Iribagiza David from WOUGNET gave an introduction to online gender based violence. He stated that in 2018, WOUGNET conducted a survey on technology related violence against women and girls in peri-urban areas of Uganda where it was discovered that more than every tenth victim of OGBV did not know where to report abuses. According to the same report, 93% of the respondents felt that those found guilty of committing acts of Online GBV should be arrested. However, he notes that it is on rare occasions that police apprehending or arresting perpetrators of online GBV is seen. Iribagiza concluded by emphasizing the need for both state and non-state actors to come up with meaningful strategies to end online GBV.

Gole Andrew from Encrypt Uganda gave an introduction to digital security from a gender perspective. He delved deeper into the various forms of online GBV. He later took participants through the practical solutions to online GBV such as:

Andrew suggested that if any online activity by someone else is suspicious, one should report it to the authorities like Police or even the social media platforms on which the violence took place.

The institutions need to transform themselves in order to hold or host individual transformation because it is time for us to practice and break out from isolation as well as sanctions in order to have a feminist Internet. This will require dismantling the patriarchy, in order to create a society in which all genders and identities are respected and valued. We are on the journey to create an inclusive and safe place on the Internet for all, this requires unity and togetherness.

Women are protected by the same fundamental human rights regulations as men, yet women are still denied those rights in societies around the world.

Human rights defenders, journalists and people in positions of marginalisation or vulnerability are exposed to many threats and risks like state and non-state surveillance, repressive censorship, phishing, hacking, data loss.